Why do we often resist this information?

1. Conspiracy denial in the US media 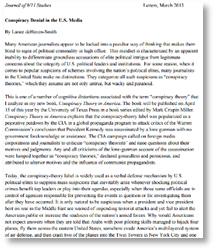 “Many American journalists appear to be locked into a peculiar way of thinking that makes them blind to signs of political criminality in high office.… They categorize all such suspicions as ‘conspiracy theories,’ which they assume are not only untrue, but wacky and paranoid.…[M]ost run-of-the-mill reporters have embraced conspiracy denial, and for them it has become an emotionally charged, self-reinforcing belief system. The mindset is self-reinforcing in the sense that it engenders feelings of superiority and is dismissive of evidence.  Ironically, conspiracy deniers think they are protecting civility and reason in public discourse, when in fact, by ridiculing reasonable concerns and appealing to elite prejudices, they are doing just the opposite.”

Conspiracy to Tell the Truth – Interview with Dr. Lance deHaven-Smith (10:02)

2. CIA foundations of ‘conspiracy theory’ as a weaponized term 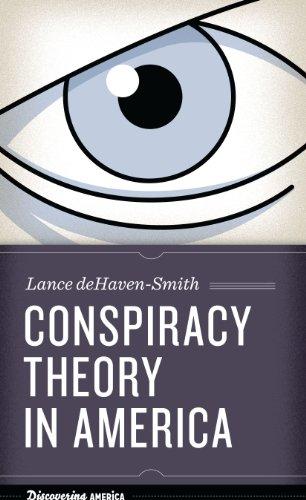 “[I]t was the Central Intelligence Agency that likely played the greatest role in effectively ‘weaponizing’ the [‘conspiracy theory’] term. In the groundswell of public skepticism toward the Warren Commission’s findings on the assassination of President John F. Kennedy, the CIA sent a detailed directive to all of its bureaus. Titled ‘Countering Criticism of the Warren Commission Report,’ the dispatch played a definitive role in making the ‘conspiracy theory’ term a weapon to be wielded against almost any individual or group calling the government’s increasingly clandestine programs and activities into question.”

3. Blinded by belief and government manipulation 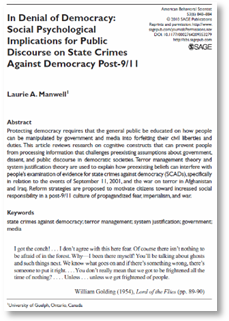 “Protecting democracy requires that the general public be educated on how people can be manipulated by government and media into forfeiting their civil liberties and duties … cognitive constructs that can prevent people from processing information that challenges pre-existing assumptions about government … how pre-existing beliefs can interfere with people’s examination of evidence for state crimes against democracy (SCADs), specifically in relation to the events of September 11, 2001, and the war on terror in Afghanistan and Iraq. Reform strategies are proposed to motivate citizens toward increased social responsibility in a post-9/11 culture of propagandized fear, imperialism, and war.”

4. Psychology experts answer “Why is the 9/11 evidence difficult for some to accept?” 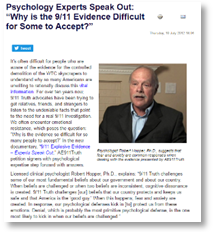 Licensed clinical psychologist Robert Hopper, Ph.D.: “9/11 Truth challenges some of our most fundamental beliefs about our government and about our country. When beliefs are challenged or when two beliefs are inconsistent, cognitive dissonance is created. 9/11 Truth challenges [our] beliefs that our country protects and keeps us safe and that America is the ‘good guy.’ When this happens, fear and anxiety are created. In response, our psychological defenses kick in [to] protect us from these emotions. Denial, which is probably the most primitive psychological defense, is the one most likely to kick in when our beliefs are challenged.”

‘Seeking Understanding – Experts Speak Out’ (12:18)
Architects and Engineers for 9/11 Truth

5. Psychology expert answers ‘Why do good people become silent or worse – about 9/11?’ 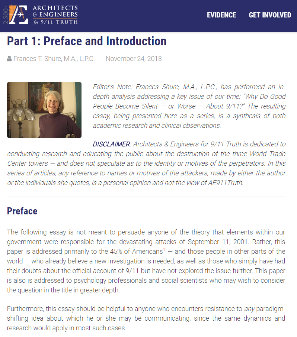 “[We have] human tendencies toward denial in order to avoid the discomfort of cognitive dissonance. Indeed, resistance to information that substantially challenges our worldview is the rule rather than the exception …. This is so because fear is the emotion that underlies most of the negative reactions toward 9/11 skeptics’ information .… [There are] many types of fear that are involved, and how they tie into the “sacred myth” of American exceptionalism.”

Are there further credible people speaking out about this?